Falcons sports teams are cheered on by our varsity cheer squad, middle school cheer squad, and our mini cheerleaders. The varsity cheerleaders are a centerpiece at all pep rallies, homecoming, and are active at football games in the fall – home and road. They travel as a team to away games throughout the state to support the Falcons. Transportation is provided from school and back for all games. In the winter, they can be found spreading Green & Gold spirit at selected basketball games. Practices are typically held on campus in the gymnasium, although some are outside at the Moore Athletic Complex.

The middle school squad supports middle school football and basketball, and they join the mini cheerleaders (grades K-5) and their varsity counterparts on the field during homecoming festivities. Mini cheer is not managed by the athletic department, but is part of the SSES after-school program.

As our beloved mascot for more than 30 years, Freddy Falcon, is also a member of the spirit squad. The current Freddy was introduced in 2016 to a raucous crowd of fellow Falcons at the school’s opening pep rally in August. Saint Stephen’s worked with BAM! Mascots in Ontario, Canada to design a custom concept for the new costume. Don’t miss your chance to meet Freddy as he soars in to represent his Falcons at a variety of athletic and community events throughout the year! 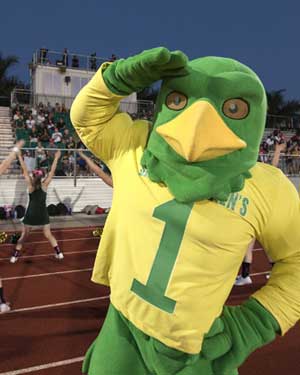