With the graduation in 2019 of Jake Manning, the last of the Falcons’ “big four,” the future of wrestling at Saint Stephen’s is uncertain. Still, a four-year run of success from 2016-19, put SSES on the map and proved that it can happen here. The quartet of Jake and Max Manning, Parker Lansberg and Jake Ross will be synonymous with Falcons wrestling for some time.

All four of the grapplers finished their careers with more than 100 victories – a standard of excellence in high school wrestling. Six SSES wrestlers in all (including Alan Morano and Darron Robinson) qualified for the state meet during that time period and the 2016-17 season stands out as a truly historic one, culminating with the first four wrestlers in school history reaching the state championship.

The campaign started with Jake Manning winning the 106-pound class at the Ed Kilpatrick Classic at Citrus High in Inverness in mid January to capture the school’s first individual title. Three weeks later, Manning and Morano (126) became the first county champions in SSES history, winning the Manatee County meet at Southeast High. Those proved to be important building blocks toward the district meet, where six Falcons competed and all notched top-four finishes to advance to regionals.

Ross (160) became the first district champion in program history and followed that up a week later by winning the school’s first regional crown. Ross, Max Manning, Morano and Lansberg all qualified for the state meet – highlighted by Morano finishing fourth to become the first Falcon to medal at the state level.

Jake Manning matched that feat in 2017-18 by also placing fourth at state to medal at 113 pounds. In 2018-19, he was the first Falcon to win multiple Manatee County titles, back-to-back district titles, and return to the state championships. Manning left the program with the most victories all-time.

The Falcons are coached by Bobby Latessa, who won an incredible 161 career prep matches and back-to-back state championships at Manatee High School in 2002 and 2003. He went on to wrestle collegiately at Harvard, where he was a four-year letterwinner. 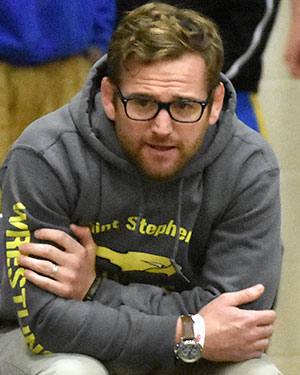