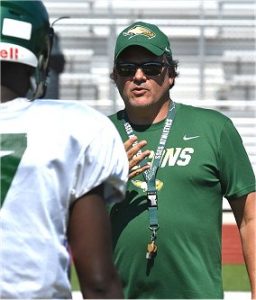 If you were to wander onto the practice field at Saint Stephen’s where I coach high school football, there are any number of phrases you might hear that, without some context, make absolutely no sense. Coaches are often chided for being heavy on clichés and occasionally rough in our delivery. In reality, good coaches find ways to communicate complex concepts, often in the simplest terms possible. Throw in the fact that those listening most likely receive information in a unique manner, and you have a high-level challenge being met by coaches on a daily basis.

Two years ago, a coach joined our staff and made an immediate impact. One of the first days he joined us on the field he used a term that had fallen out of my coaching vocabulary. When I heard it, I was reminded of what a powerful tool it could be. As this coach watched a play unfold, he realized our quarterback threw a ball to a receiver without understanding who the receiver was, and the throw was too far for the receiver to catch. Quickly, almost as a reflex, he called out to our quarterback, “KYP!” I chuckled, told him that was a great reminder, but explained he would have to spell out that term for our quarterback who had no idea what he meant.

While there are a couple potential lessons in this example about clear communication, I want to focus on how valuable the concept of KYP is. If you don’t know what it means, you have probably guessed it is an acronym. KYP stands for Know Your Personnel. In the case of our quarterback, he had been throwing with a group of much faster receivers and when he threw to a slower receiver, he forgot to allow for the difference in speed and wildly missed his target. On a high school playing field, KYP serves as a reminder to be aware of who you are interacting with in a given moment. Off the field, it may hold even greater power.

Many of us are creatures of habit. We like to get up, drink our coffee, exercise, read something and even interact with others on a very regular schedule. Our schedules become important to us and we feel best when we are on pace to keep that schedule throughout the day. What can often be missed is, other people have schedules too, and theirs may not always mesh with ours. But, our schedules are just one of the ways our preferences inform how we work, live, and even play.

If we believe that KYP is an important concept at work, at home, or in any culture we value, we have to take a hard look at what is being said. Know Your Personnel speaks directly to the social-awareness pillar of emotional intelligence. If we KNOW the people around us, we can anticipate how they will handle success, failure, disappointment, or even an unexpected turn of events. Armed with a sense of how others function, we can choose to communicate with them in a way they absorb information best. While this seems perfectly reasonable and like a definite best practice, the challenge is clear. When those around us are under duress, we quite likely are too. In those moments of high stress, we prefer what feels best for us and think less about what would help those around us manage. Not unlike our preference for our own daily schedule, we prefer our “go to” emotional routine as well. The result? We treat those around us as if they should just get in line with our feelings and function how we wish they would.

There may be no greater feeling than to be known, truly known, by someone who is in a leadership role above us or a collaborator. Whether we are talking about a parent, or a co-worker to whom we report, when we feel known, we feel more at ease and find it easier to trust their thought process and ultimately, their decisions. Knowing people around us takes work. It requires that we invest in the development of relationships and it then asks that we think about how the other person will respond to whatever we are about to do or say. If we are truly committed to the success and performance of others, this is work well worth doing. People who feel known, appreciated for who they are and what they bring to the table, function at a higher level and experience less stress.

If our goal is success on a playing field, being an effective parent, or leading a company to heights unseen, KYP is a tool worth using. A focus on truly knowing others tells them they matter, it demonstrates that their skill sets are valued, and reinforces that we want to do all we can to see them perform at the highest possible level. The other great benefit is this: When we model the importance of knowing others, they are more likely to seek to know us. That means those around us will work harder to make sure we have what we need to excel and will be more likely to communicate in way that makes sense to us. If knowing others takes work, then being known requires equal amounts of trust. Yet, while allowing ourselves to be known feels risky, the resulting trust becomes the foundation of our relationships. To know and be known, is to trust and to grow.

In the end, we are building teams every time we find ourselves working together, whether at our jobs, or elsewhere. Let us examine how well we know those we find ourselves alongside every day and see how well we are known. Commit to finding ways, on a regular basis, to know those around you better and to make yourself better known. Make an effort to build trust in all that you do and act in a way that draws the trust of others. And, the next time you hear someone say KYP, find confidence in the knowledge that you do.

Tod Creneti has been the Falcons’ head football coach since 2011 and led SSES to independent state championships in 2016 and 2017. This blog post was originally published here