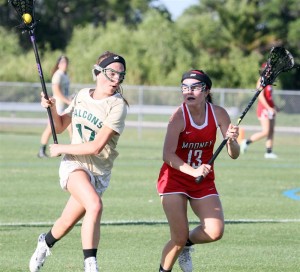 Girls lacrosse won its first district championship in just its third season of competition, topping Sarasota Cardinal Mooney 13-8 on Friday, April 8. The Falcons (9-4) charged out to a 5-1 lead less than 10 minutes into the first half thanks primarily to the offensive play of sophomore Katie Pierce, who notched three of the Falcons’ first four goals. Cardinal Mooney (10-5) narrowed its deficit to within 8-6 at halftime, but Saint Stephen’s responded with a dominant second half to close out the game and the District 17 title. Pierce scored four times and junior Emily Hiebner added three goals as the Falcons advanced to host a state play-in game against Estero High School on Friday at 7 p.m. at the Moore Athletic Complex.