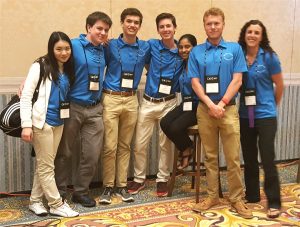 Led by five SSES students, the Manatee County Academic Team represented the county in Orlando, April 27-29, at the state’s official academic competition – the Commissioner’s Academic Challenge sponsored by the Florida Department of Education. Throughout the fall, Manatee County high schools competed head-to-head in matches of 60 questions each. Questions covered all academic subjects, and students were awarded points for speed and accuracy. The top six students were invited to become members of the all-star county team. They practiced as a team throughout the spring in subjects such as math, history, and economics. This year’s team was comprised of Jack Lyons (Manatee High), MaryAnn Placheril (Saint Stephen’s), Alex Siegal (Saint Stephen’s), and Vanessa Yan (Saint Stephen’s), Jack Berry (Saint Stephen’s), and Matthew Thomas (Saint Stephen’s). Team Manatee got off to slow start at the Challenge, falling immediately into the consolation round, but they fought back through the bracket to reach the finals and ultimately finished sixth in the state in Division One, the largest classification in Florida. You can read more at the 2017 Academic Challenge website.