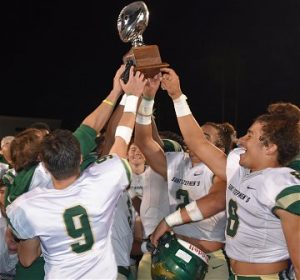 Saint Stephen’s football completed an undefeated 2017 season and defended its Sunshine State Athletic Conference Independent State Championship with a 49-21 Florida Bowl win over Windermere Prep on Nov. 18 at the Master’s Academy in Oviedo. The Falcons (11-0) started fast with a 3-yard TD run by senior quarterback Fred Billy just more than two minutes into the game and never looked back, racing out to a 28-0 advantage and leading from wire to wire. Billy finished with 146 rushing yards, 49 passing yards and two touchdowns. Senior running back Chase Brown was a dominant force, running for 201 yards and scoring five times – four on the ground and one on a pass reception that put the game out of reach in the fourth quarter. The Saint Stephen’s defense forced five turnovers with two interceptions, a fumble and two on downs. Junior offensive/defensive lineman Dalton Francis recovered two onside kicks and a fumble. He also made a huge tackle on a fourth-down run that yielded one of the turnovers on downs. The Falcons finished the season riding a 22-game winning streak. SSES has not lost since the opening week of the 2016 season. The Falcons outscored their 2017 opponents 529-83, averaging better than 48 points per game.