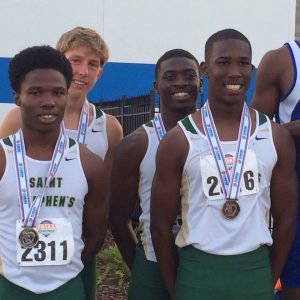 After fantastic performances at the regional meet in Clearwater in April, 10 Falcons qualified to represent Saint Stephen’s at the State Track and Field Championships, May 6-7 at IMG Academy. Leading the pack were regional champions Katie Siegel in the high jump and the boys 800-meter relay team of Andrew Csubak, Henry Howell, Hayes Chatham, and Dawson Hamilton. Every Falcon who competed at the state meet placed in the top 10 to medal in their event: Siegel was fifth in the high jump and sixth in the triple jump; Letherio Jones, Fred Billy, Jordon Murrell, and Bobby Harrison placed fourth in the 4×100 relay; Jones, Demetrius Davis, Murrell, and Csubak were seventh in the 4×400 relay; Chatham, Howell, Luke Valadie, and Csubak placed eight in the 4×800 relay; Murrell was seventh in the 200 meters; Csubak was sixth in the 800 meters.