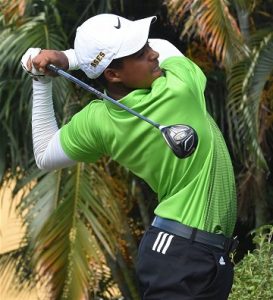 Saint Stephen’s won the Manatee County Golf Tournament and placed three players on the five-person All-County team on Saturday, Oct. 1 at Buffalo Creek Golf Course. Led by individual champion Ryan Kinkead, the Falcons finished at 286, 13 strokes better than runner-up Lakewood Ranch. Kinkead shot a 3-under 69, two strokes better than any other golfer and three better than last year’s winning score. SSES’s Alan Klenor finished in a tie for second with 71, and Massimo Mbetse (pictured) shot even-par 72 to finish fourth. Kinkead’s day was marked by consistency. He only bogeyed once and dropped in four birdies. Considering wet conditions and an afternoon storm that ended some golfers’ day early, Kinkead was pleased mostly with his putting. He sunk a 25-footer on 16 with a putt that drifted three or four feet from left to right. It was the longest putt of the day for the junior and the cap on a historic day for the Falcons.