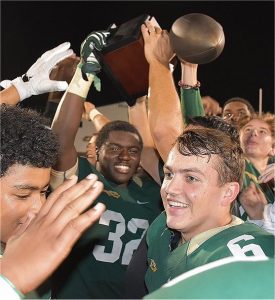 Saint Stephen’s tallied three touchdowns in a span of 6:02 of the fourth quarter to turn a 14-point deficit into a 21-14 victory over Vero Beach Saint Edward’s School in the Third Annual Florida Bowl at The Master’s Academy in Oviedo on Nov. 19. With the victory, Saint Stephen’s claims the Sunshine State Athletic Conference Championship billed as the Florida Independent State Championship. Junior quarterback Fred Billy led the way for the Falcons, rushing for 206 yards on 25 carries, including 112 yards and two touchdowns in the fourth quarter. He also passed for 74 yards and was named the game’s Most Valuable Player. The victory put a cap on a historic season for SSES. After losing their opening game, the Falcons won 11 straight on the way to their first-ever championship.