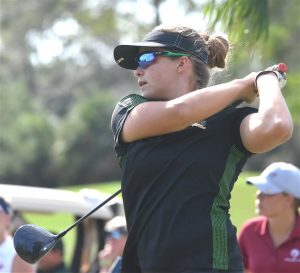 The SSES girls and boys golf teams successfully defended their 1A-District 16 titles on Monday, Oct. 16, advancing to their respective regional tournaments on Oct. 23. The girls have now won six consecutive district crowns. Junior Alan Klenor led the boys at Tatum Ridge Golf Links, firing a 4-under par 68 as the Falcons carded a 7-under-par 281 to win the team title by eight strokes over Cardinal Mooney. All five Falcons scored par or better. Massimo Mbetse was 2-under at 70, Ryan Kinkead fired a 71 and David Hu and Song Bai each shot even par 72. SSES advances to the Region 6 tournament at the Ritz-Carlton Members Golf Club in Lakewood Ranch. Freshman Maria Huang paced the girls with a strong 75. Catherine Huang scored 81 and the Falcons finished with 375 as a team to win and move on to the regional tournament at San Carlos Country Club in Fort Myers.