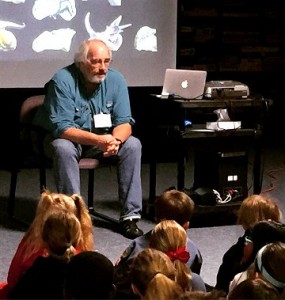 Famed paleontologist Jack Horner, curator at the Museum of the Rockies in Montana and scientific adviser on the Jurassic Park film series, talked dinosaurs with our 3-6 graders on Dec. 8. Horner fascinated the students with stories from his many digging expeditions around the world and drew gasps when he described how today’s birds are really living dinosaurs. The students asked a great series of questions following Horner’s presentation, which was arranged by SSES Board of Trustees Vice President Elizabeth Moore. Although now semi-retired, Horner continues to travel each summer on digs for fossilized dinosaur remains. He has provided guidance to the producers of all four Jurassic Park/World motion pictures and appeared in a cameo in last summer’s blockbuster Jurassic World.