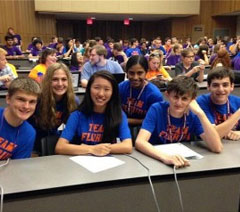 Eighteen Saint Stephen’s students joined more than 1,600 Latin students from around the country in San Antonio, Texas at the end of July for the 2015 National Junior Classical League Forum. At the close of the week, SSES students came away with a National Championship in Advanced Certamen, a second-place finish at Novice Certamen, and a basket full of ribbons for top-10 finishes in academics, art and athletics. Every Saint Stephen’s student had at least one top-10 finish in academics or creatives. Leading the students to the competition at Trinity University were teachers Tony Haakman, Alice Revard and Geoff Revard, and parent chaperone Lisa Beckstein.

Headlining the accomplishments were four Saint Stephen’s students, Matthew Thomas, Joe Class, Ethan Leuchter and MaryAnn Placheril who were members of Florida’s Certamen teams at the national tournament. Certamen is an academic team-style game divided into three divisions: Novice (for first-year students), Intermediate (for second-year students) and Advanced (for levels three and above). Joe Class, Ethan Leuchter and MaryAnn Placheril (coached by Geoff Revard) won the national championship at the Advanced level. It was the second national title for MaryAnn Placheril who won at the Novice division in 2013. Florida won its seventh title in the past 15 years. The Advanced win also came with a $500 prize, which the students donated to the charity Water Group, a non-profit organization dedicated to bringing clean, safe drinking water to people in the developing world. Matthew Thomas was a member of the Novice team coached by Tony Haakman that placed second in the tournament

Congratulations to four students who had special placements: Joe Class’ fourth place on the Academic Decathlon earned him a $100 prize; Ethan Leuchter’s first-place on Roman History (99 out of 100 correct) was the best score at any level for this test; Matthew Thomas finished in tenth-place in Overall Academics, and Savannah Sandstrum’s Saint Stephen’s Latin Club scrapbook took third nationally.