Lessons in Kindness are Key at SSES 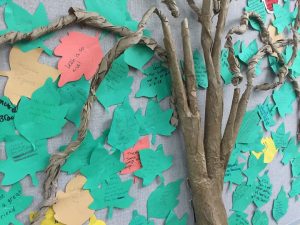 Can kindness be taught? At Saint Stephen’s there is concensus.

The Lower School’s countdown to Christmas 2017 included a daily “Kindness Calendar,” which taught students to be aware of and committed to acts of kindness. The instructions were as simple as, “Smile at somebody today.”

“We want them to learn how what they do and say impacts others and how small things can start a whole kindness chain,” Lower School Director Jennifer Helbing said. “We weave it through everything we do and it actually starts during the admission process. We tell families about our focus on the development of the whole child, and character development holds just as much significance as our academic lessons.”

Just as with the academic curriculum, Saint Stephen’s sees these learning opportunities as something foundational and built upon as students progress from division to division. Perhaps no time is more critical in teaching about kindness than the middle school years.

“They’re trying to figure out who they are as individuals. It’s a time when friendships are changing and it can be confusing when they’re moving away from each other. Navigating all of that is difficult,” Middle School Director Joel Erby said. “So we do a lot of things to help students remember that it’s okay to be nice, that it’s not taboo and it doesn’t make you soft or weak.”

One of the visible approaches Erby uses is a “Gratitude Tree,” which hangs prominently on a second-floor wall in the middle school building. Students add leaves to the tree with messages when they notice teachers or their peers being nice, kind or helpful to others. Each week at chapel services, Erby selects a handful of the leaves to read and recognizes the students publicly. During the opening weeks of school, the tree featured just a handful of notes. It now overflows.

While it might seem easy to dismiss the value of these types of exercises, the results can be significant, and the scientific data is plentiful. A recent Stanford University study showed that if you prioritize happiness, you will be more productive, creative, resilient, energized, charismatic and influential. Researchers conducted a series of studies that observed how witnessing kindness inspires kindness and causes it to spread.

Researchers in Great Britain directly related happiness to acts of kindness. Participants in the study were given a life satisfaction survey and then assigned randomly to one of three groups. One group was asked to perform a daily act of kindness for 10 days. A second group was instructed to do something new each day. The last group received no instructions. After the 10 days, the participants completed another life satisfaction survey and results showed that the individuals who practiced acts of kindness experienced a significant boost in their happiness.

Exhibiting kindness may have an even longer, more profound effect. Harvard and University of British Columbia researchers gave participants small sums of money and the choice to spend it on themselves or someone else. Two findings were observed. First, people in general felt happier when they were asked to remember a time they bought something for someone else. This happiness boost was the same regardless of whether the gift cost $20 or $100. The happier participants felt about their generosity, the more likely they were to spend on someone else instead of themselves.

Author, speaker and researcher Shawn Achor has demonstrated that if you perform random acts of kindness for two minutes a day for 21 days, you can retrain your brain to be more positive. Studies such as his show that when your brain is more positive you are more likely to be creative, intelligent and productive.

Even the most successful companies are recognizing the virtues of benevolence. Billionaire entrepreneur Mark Cuban was recently quoted saying, “Nice is way undervalued right now. It’s one of the most valuable assets out there.” Within the workforce, kindness towards one another can inspire employees to be more productive and make businesses more profitable, attributes that can translate to job success, wealth, healthy relationships and better health. The adage that success breeds happiness may be turning on its head.

“The goal for us as educators in independent schools is to help create great kids who not only are successful academically but have great character traits,” Erby said. “You want them to look back when they’re older and remember how they were treated here and realize that a lot of the things they learned about how to treat people with respect and kindness, those were ideas that were reinforced at Saint Stephen’s.”