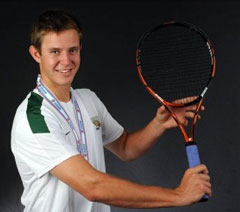 Senior Zach Bessette was a unanimous selection as the area’s top high school tennis player, earning 2015 player of the year honors from both the Bradenton Herald and Sarasota Herald-Tribune. Bessette, who will play in the fall as a freshman at Amherst (Mass.) College, led the Falcons to a Class 1A state championship. It was the Falcons’ fourth crown overall and first since 2004. A student at SSES since kindergarten, Zach competed as a member of the school’s tennis program since eighth grade, and his career also included a state doubles title with partner Brian Berdusco in 2013. He was the team leader as a senior, posting a 9-1 regular-season record and an undefeated run through regionals. At Amherst, he will join a traditionally strong program that won the Division III national title in 2014.