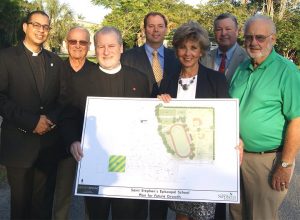 Saint Stephen’s and Christ Church of Bradenton have announced an agreement of cooperation that will allow the school to build a multi-purpose performing arts center on property currently owned by the church.

With no existing space for construction on the school’s 35-acre campus, the Saint Stephen’s Board of Trustees and Head of School Dr. Jan Pullen began discussions last year with Christ Church Rector Fr. Joel Morsch and the church vestry on an agreement that was recently approved. Christ Church has given its more than 67,000-square-foot property west of 41st Street West to the school for the construction of a performing arts center and parking lot to be used by both entities. Saint Stephen’s will also build a 3,500-square-foot facility to replace the church’s existing thrift shop and food pantry, which currently serves more than 1,200 patrons monthly.

This collaboration allows Saint Stephen’s to begin a capital campaign to fund the project. School and church officials recently visited St. Mary’s Episcopal School in Tampa to tour its performing arts center. The multi-purpose Saint Mary’s Hall, which features a reception foyer, raised stage with backstage and technical support, and open floor seating for approximately 500, is being used as a model for the building Saint Stephen’s will create.

Although they are independent entities, Christ Church and Saint Stephen’s have a strong relationship that dates back 46 years. SSES opened its doors in 1970 as an outreach mission of the church. Since its founding, Saint Stephen’s has used the church sanctuary for weekly chapels, graduation, Baccalaureate service, and other special services. Fr. Morsch and a designated parishioner sit on the Saint Stephen’s Board of Trustees.