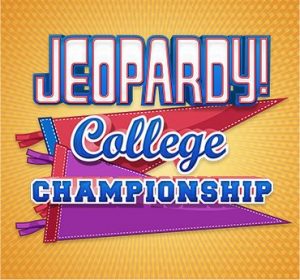 Hannah Sage, a 2016 Saint Stephen’s graduate and current UCF student, will appear on the annual Jeopardy! College Championship Tournament airing nationwide April 9-20. Hannah was a National Merit Scholar and a member of the academic team at SSES. She was one of five Saint Stephen’s students on the six-member Manatee County team that won the 2016 Florida Commissioner’s Academic Challenge.

Contestants in the Jeopardy! tournament are full-time undergraduate college students with no prior degrees. The tournament began during the popular quiz show’s 1988-89 season. The College Championship uses a 10-game format: 15 players, in groups of three, play in five quarterfinal games; the winners of those five games and the four highest-scoring non-winners as wild cards become the nine semifinalists who compete in three games, with no two players rematching each other in the semifinal round. The three semifinal winners advance to the two-day final round, in which contestants play two separate matches, with the contestants’ combined scores for both matches determining the champion.