SSES Rises to the ‘Challenge’ 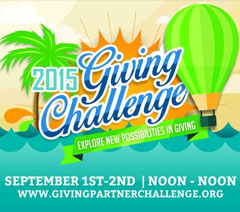 The Saint Stephen’s community voiced its support for the school and its mission loud and clear during the 2015 Giving Challenge (Sept. 1-2), donating more than $78,000 during a 24-hour period. That total, represented by 415 individual gifts, was the largest for any single organization among the 450 non-profits participating in Manatee, Sarasota and Charlotte counties. The Challenge also served as the kickoff to the school’s annual “Drive to 75” Saint’s Fund campaign, which runs 75 days through Nov. 14. In total, more than $6.6-million was raised for area non-profit organizations through the Giving Challenge. The Patterson Foundation also committed to match individual gifts up to $250. The additional match provided to Saint Stephen’s will be announced at a later date. A special thank you to everyone who supported SSES during the Challenge.