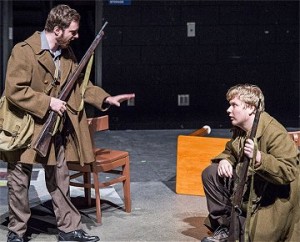 SSES senior Julien Freij won the top prize in Theatre Odyssey’s Student Ten-Minute Playwriting Festival, held Jan. 15-16 at the David S. and Ann V. Howard Studio Theater at State College of Florida. Julien’s play, Brothers in Arms, a poignant portrayal of the Christmas truce between the British and the Germans during World War I, was directed by former SSES faculty member Preston Boyd. This is the second consecutive year that Julien has been recognized with the honor. He won in 2015 for As Long as the Moon Shines. Brothers in Arms will next be featured at Theatre Odyssey’s Ten-Minute Play Festival, May 5-8 at the Cook Theater at Sarasota’s Asolo Center for the Performing Arts. Theatre Odyssey was founded in 2006 to promote the efforts of local playwrights and actors. The group has premiered more than 90 plays written, directed and performed by Gulf Coast playwrights, actors and directors.