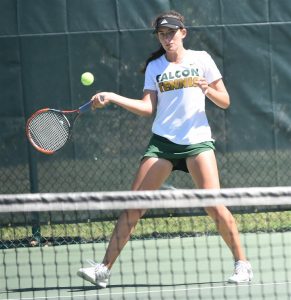 Saint Stephen’s tradition of excellence on the tennis courts continued Tuesday, April 11, when the Falcons boys and girls captured their respective 1A-District 9 tournament titles. On Monday, SSES advanced to the finals in all 14 brackets (singles and doubles), and went on to win 13 of those matches the following day at the Saint Stephen’s tennis complex to leave no doubt. The Falcons will next host regional matches on Tuesday, April 18. The boys won their 14th district title and will be seeking their sixth regional championship. The Falcons also boast five state crowns, the most recent in 2015. The girls captured their 17th district title and have won seven regional and state championships. Their most recent state win came in 1992.