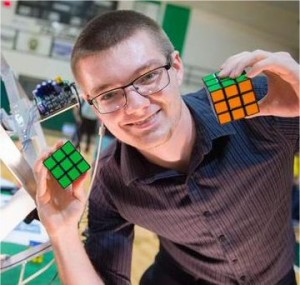 Amid cheers of support from the entire school, senior Zack Gromko broke a Guinness World Record on Thursday, Oct. 15, when the robot he built solved a Rubik’s cube in 2.4 seconds. The entire school community gathered in Hoagland Arena to watch the feat. Independent judges and timekeepers were also on hand to verify the attempt and submit the proper paperwork to Guinness in order to officially establish the record. Zack, who can finish the cube by hand in less than 20 seconds, started solving the popular puzzle as a sixth grader. A few years later, he saw video of a device solving the cube in record time and hatched the idea of topping that feat. Combining his love for math, engineering and puzzles, Zack went about constructing his computer-controlled robot last year. After plenty of trial and error, his creation was eventually able to consistently best the established record. On Oct. 15, Zack put the robot to the ultimate test in front of the school audience and gathered local media. The first attempt solved the cube in 3.5 seconds. The second set the new record.