Thanks to the many generous donations from parents at the end of the 2018-19 school year and the inventory that remained following the closing of the Community Thrift Shop, we have dozens of used – but still very good quality – Saint Stephen’s logo uniform shirts, pants, pullovers, and more available for new and returning Lower and Intermediate School families. If you are interested in these items, please plan to stop by on Thursday, Aug. 1 in the Campus Center Library starting at 9 a.m. The clothing will be available at no cost for as long as it lasts.

The 71 members of the Class of 2019 proudly received their diplomas on May 25 at Neel Auditorium on the campus of State College of Florida. The class was highlighted by four National Merit Scholar finalists and a National Hispanic Scholar. As always, every member of the class was accepted to a college or university. Of the graduates who identified a first-choice college, 92-percent were accepted to that college. Two graduates were awarded their university’s top academic scholarship, paying full tuition plus research and/or study abroad grants. Nine graduates were offered Honors College/Leadership program enrollment at their chosen college/university. Five graduates were recruited to play intercollegiate sports: football, golf, soccer, and swimming. In all, the class earned more than $6-million in merit aid and $1.1-million in Bright Futures awards.

Falcons head baseball coach Mike Verrill has been selected for induction into the Maine Baseball Hall of Fame. Mike coached high school baseball for 20 years in the state and also led the program at Bowdoin College in Brunswick, Maine. The induction ceremony is set for July 28 in Portland and he will also be recognized on July 27 at a Portland Sea Dogs (Boston Red Sox AA minor league affiliate) game at Hadlock Field. The Maine Baseball Hall of Fame was founded in 1969 to honor players, coaches, umpires, organizers and benefactors who have achieved prominence in, or made valuable contributions to, baseball in Maine. Verrill has coached baseball, softball and girls basketball at Saint Stephen’s.

The Falcons boys and girls tennis teams dominated the 1A-District 9 tennis tournament (April 15-16) at the Payne Park Tennis Center in Sarasota, winning all four doubles titles and nine of 10 singles to advance to regional play. The boys (Kevin Jiang, Max Damm, Gleb Ibragimov, Max Bonte and Max Petrov) registered a complete sweep to capture their first district championship since 2017. The girls (Paradise Traub, Laura Perazzolo, Maria Petrova, Autumn Sun and Ella Dalzell) won every match but No. 5 singles to defend their crown. St. Petersburg Shorecrest (boys) and Cardinal Mooney (girls) finished a distant second in the tournament to also advance. The Falcons will host regionals next Tuesday and Thursday (April 23 and 25).

For the first time in school history, Upper School Latin students took first place in Senior Division Academics at the Florida Junior Classical League state forum in Orlando, April 3-6. Competing against 47 other Florida schools, Saint Stephen’s took home the trophy for academics and finished third overall – also a school record. The Middle School team placed third in Academics and third in the overall sweepstakes of the Junior Division. All 42 Falcons in attendance placed in the top 15 in their chosen contests and three students (Tyler Kadivar, Matthew Thomas and Michael Thomas) took first place in both of their contests. The four SSES certamen teams also had impressive results that included a third-place finish in the Advanced Division, and second place in the Intermediate Division.  The four seniors on the team (Carter Beckstein, Graham Beckstein, Colton Melnick and Matthew Thomas) were members of the team that captured first place in Academics five years ago in the Junior Division. It was fitting that they went out achieving the same accolade in the Senior Division. In addition to these impressive accomplishments, sophomore Annie Class was elected to the office of parliamentarian for the FJCL. This marks the eighth consecutive year that a Saint Stephen’s student has served as a state officer.

Eighth grader Jackson Nealis finished first on the U.S. History Bee Exam, third in the National History Bee Quiz, and fourth in the International Geography Bee Exam at the 2019 Central Florida History Bee and Bowl Championships at Shorecrest Prep in St. Petersburg on March 23. Those results qualified him for the upcoming JV National Tournament in Washington, D.C., the Middle School Nationals in Chicago, and the International History Olympiad Bee. Jackson competed at the Junior Varsity level (7th, 8th, 9th and 10th grades). The U.S. History Bee is a social studies competition for primary and secondary school students across America and consists of two stages. The first is the National Qualifying Exam, and second The National History Bee is a buzzer-based history quiz competition. Students compete in a series of rounds where they attempt to be the first to ring in and answer paragraph-length questions about various topics in history. Congrats, Jackson! #worldclasseducation

The Falcons completed a sweep last week, with both soccer teams winning 1A-District 7 soccer titles. The girls took a 2-1 lead into halftime on Thursday and added two more second-half goals to overwhelm Out-of-Door Academy, 4-1. It was the Falcons first district championship since 2014 and propels them into a regional quarterfinal on Tuesday (Feb. 5), when they’ll host First Baptist Academy. On Friday, the boys got a pair of gutsy goals from senior Noah LaBelle in overtime to top Bradenton Christian, 4-2, and capture their ninth consecutive district crown. The win also extended Saint Stephen’s unbeaten streak in district play that now dates back nearly a decade. Since the end of the 2009-10 season, the Falcons are an unbelievable 49-0-3 in district regular-season and tournament play. The boys open regional play at home on Wednesday night (Feb. 6) against Community School of Naples. 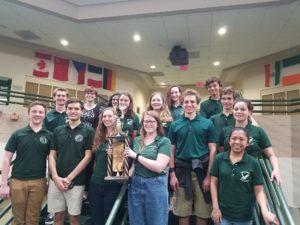 The Saint Stephen’s Academic Team is once again the champion of the annual Manatee County academic challenge, going undefeated and winning the overall title by 132 points over the second-place team. The Falcons completed their sweep on Tuesday night, Dec. 4, by hosting and capturing the last of the three competitions in the fall/winter season. It was the fifth straight championship for the Falcons. Two Saint Stephen’s students finished among the top six individual scorers for the season. Senior Sidney Knowles (No. 1) and junior Kassandra Haakman (No. 3), along with two students each from Southeast and Braden River high schools, will represent Manatee County at the state Commissioners’ Academic Challenge in April in Orlando. 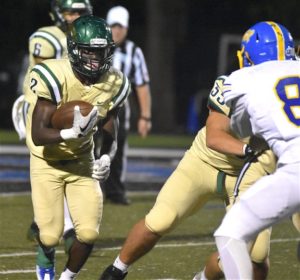 Despite the dejection on the field after the Falcons fell, 35-14, to Orlando Christian Prep on Nov. 17 in the Sunshine State Athletic Conference Independent State Championship Game, the 2018 season might go down as SSES’s most noteworthy. It was a year that proved that Head Coach Tod Creneti and his staff have created a sustainable program. Few outside their own locker room expected these Falcons to go 10-2 and advance to their fourth straight state title game. With the graduation of uniquely talented players including Fred Billy, Demetrius Davis, Chase and Sydney Brown, SSES figured to struggle. Instead, new stars emerged, led by sophomore running back D.J. Clark (pictured), who rushed for nearly 1,500 yards and 19 touchdowns, and junior offensive/defensive lineman Dylan Davis. Although they weren’t able to capture the school’s third consecutive SSAC state title, the 2018 Falcons capped off a four-year run in which Saint Stephen’s is 41-5, with multiple division and conference crowns. Despite losing more than 90-percent of their offensive production from the previous year, the Falcons still averaged 35 points while allowing just 11 per game. Davis led the postseason awards list by collecting first-team honors on both the Florida Athletic Coaches Association All-District 16 team and the Sunshine State Athletic Conference All-Conference team. Clark and senior offensive lineman Dalton Francis were also chosen SSAC first team. Sophomore safety Calvin Sauerbeck was second-team all-conference. Creneti took the top honors as All-Star Coach in District 16 (Sarasota and Manatee counties) and was named the SSAC Coral League Coach of the Year. 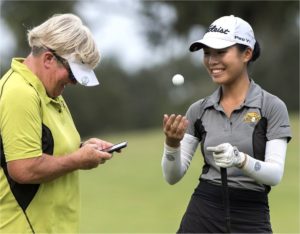 Led by sisters Maria and Catherine Huang, the SSES girls golf team finished in 10th place at the 2018 Class 1A State Championship Tournament, Oct. 30-31 at the Mission Inn Resort, Howey-in-the-Hills. The Falcons made their seventh consecutive state tournament appearance and improved on their 11th-place finish in 2017. The Huang sisters shot identical two-day totals of 161 to tie for 41st place individually. SSES improved eight strokes from the first day to the second, but was unable to make up enough ground to break into the top 10, finishing 12 shots behind Winter Park Circle Christian and 15 behind Tampa Prep. Orlando First Academy ran away with the team title, carding a 580 to win the tournament by 38 strokes. The state tournament trip was the culmination of another banner season for the Falcons, who captured their seventh consecutive district title and sixth regional crown in seven years.