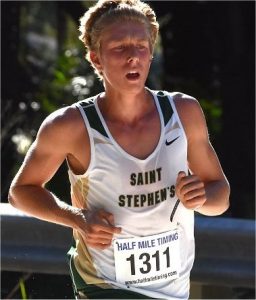 Saint Stephen’s cross country made school history on Thursday, Oct. 20, as the boys and girls teams both captured their first-ever district titles at G.T. Bray Park to qualify for regionals on Oct. 28 at Holloway Park in Lakeland. Senior Andrew Csubak (pictured) and junior Henry Howell finished first/second overall for the boys as the Falcons outdistanced 11 other schools for the championship. It was the second individual title of the season for Csubak. The boys will be looking to make their third straight state meet appearance and improve on last year’s fifth-place finish at regionals. Junior Baylee Barker was third overall to lead the Falcons on the girls’ side. Saint Stephen’s placed five girls runners among the top 13 at the meet to advance.