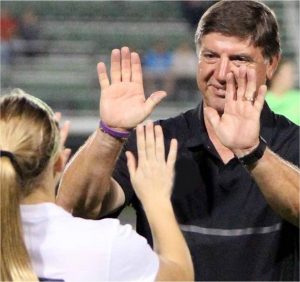 Saint Stephen’s has added another high-caliber coach with a championship resume to its already impressive roster with the hiring of Guy Virgilio to lead its girls soccer program.

Virgilio comes to the Falcons from Lakewood Ranch High School, where he was the only coach in that program’s history, beginning with the 1999-2000 campaign. In 18 seasons, Virgilio led his teams to a record of 312-75-39, won 13 district championships, three regional championships, and appeared in three state Final Fours – the last time in 2014.

Virgilio also mentored a series of successful players during his tenure, including future Division I stars Gi Krstec (Maryland), Sarah Miller (USF), and Lindsay Thompson (Florida). He joins a soccer program at Saint Stephen’s that will now boast two of the most successful high school coaches in the state. Boys coach Marc Jones is the Manatee/Sarasota area’s all-time winningest coach with 375 career victories.

“I’m excited to join the Falcon family and appreciate the opportunity,” Virgilio said. “I believe we can be successful with hard work and dedication, and have fun at the same time.”

Virgilio replaces Andrew Sopher, who is relocating out of state after two successful seasons leading the Falcons. SSES finished the 2017-18 campaign with a 10-5-2 record, a district runner-up finish, and regional appearance.